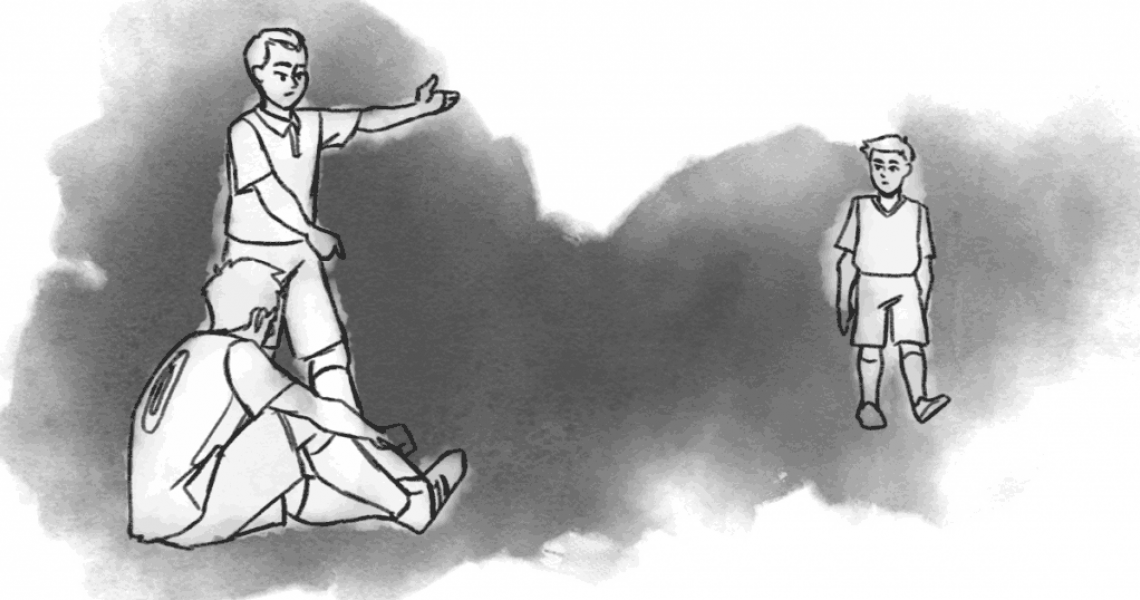 Sports are a social situation.  They take place with others and in front of others.  This is part of their appeal; players enjoy the camaraderie, fans quench their thirst for tribal belonging and coaches satisfy desires to influence others.  Hence self-isolation is difficult for sports fans who crave these absent pleasures and the same applies to officials.  Referees hold the same internal love of the game as everybody else, and so also enjoy participating in the trivial discussions about football that are currently dominating social media while we experience an enforced break from the game.

One such discussion was reported in The Telegraph on the 15th April, when Michael Oliver was asked to cast his expert eye over the infamous 1970 FA Cup Final replay between Chelsea and Leeds United.  To paint a picture of this game, and to understand what referees label ‘game temperature’, if you type 1970 FA Cup Final into Google the second suggestion that your computer will offer you is ‘1970 FA Cup Final fouls’.  It wasn’t a pleasant affair.

So, what did Oliver think of the game and what sanctions would he have imposed?  To start with, the Premier League official states that Chelsea’s eventual match winner, David Webb, would have been given his marching orders in the 14th minute, with no less than 11 other players having an early bath as well.  Obviously, the game would have been abandoned due to a team falling below the minimum number of players, but you get the point: many players should have been sent off.  This view was endorsed by former Premier League referee David Elleray in 1997, who believed 6 red cards and 20 yellows should have been shown.  Match referee Eric Jennings, however, only cautioned one player; Chelsea’s Ian Hutchinson.  So why the discrepancy?

An obvious answer is the evolution of the game.  Simply put, what players such as Ron Harris and Norman Hunter felt was acceptable is not tolerated in contemporary football.  Another is that Jennings missed key incidents due to a lack of fitness and movement, something that officials have benefitted from greatly since turning professional in 2001.  But this is to simplify an issue that is more nuanced than that.  Indeed, there are many layers to refereeing that prevent what FIFA (and fans) consider to be the Holy Grail: consistency.  While there are many explanations as to why such differences in opinion occur – speed of the event, point of view due to positioning, perception et cetera – two researchers based in the Netherlands wanted to see if it was possible to review all the evidence of referee influences and attribute them to a sole cause.  Much to the delight of Thomas Dohman and Jan Sauermann, it was.

In 2016, they performed an evaluation of all extant literature about referee bias.  This included looking at a vast number of research papers that concluded that referees are subject to many influences, even if their effect was relatively small.  These influences ranged from officials playing more stoppage time if the home team was losing by a margin of one goal to the away team being more likely to be punished with a card than a home team player.  The referee has even be identified as a key factor in home advantage.  This is particularly relevant for football as it is the sport where home advantage is most significant, more so than any other sport.  It turns out that sports are social not just because they are played out in front of and with others, but these individuals all influence one another as well.  Upon reflection of such evidence, the researchers decided that the cause of these effects was what they termed the ‘social payoff’.

What exactly is the social payoff of for referees?  Simply, it is the reward they receive (whether real or perceived) for making certain decisions.  For instance, if the official does not play an adequate amount of stoppage time when the home team is losing by one goal, he or she may be blamed for the loss, with fans citing a lack of opportunity for their side to score an equalizing goal.  If an official does not show the aggressive away team player a card for their conduct, they may feel that the home fans will see them as ‘soft’ or ‘losing control’.  Conversely, a referee that allows the home team an extra 60 seconds will avoid criticism from the majority of supporters present (“he/she played an extra minute”) and if disciplinary sanctions are harder for the away team, they will be seen as fair by the home crowd who inevitably make up the largest proportion of present spectators.  This is a social payoff; it is taking action that appeals to the masses to avoid criticism or attract praise.  This can be seen in figure 1.

Figure 1: the average number of challenges given against the home team and the away team with and without crowd noise (adapted from Nevill, Balmer & Williams, 2002).

Figure 1 shows ‘social payoff’ in action.  Two groups of officials were tested; group one watched a game between Liverpool and Leicester with crowd noise and group two watched in silence.  When referees watched without crowd noise, Liverpool (the home team) conceded, on average, around 15 fouls in the game.  However, when the noise of the Anfield faithful was filtered in, the number of fouls they were perceived to have committed decreased to just over 12.  It may not seem a lot, but it’s a difference of about 20%.  Not only that, but the number of fouls Leicester conceded increased, improving Liverpool’s advantage.

It is worth remembering that this study was conducted in laboratory conditions.  There was no actual crowd present.  Yet decisions were still influenced.  It seems strange therefore to attribute this to ‘social payoff’.  So what other explanation could there be?  It is possible that the crowd noise influences a referee’s ‘implicit’ decision making.  Experts tend to perform best when they ‘just do it’, as opposed to thinking about it.  It’s why in situations of high pressure, experts can choke; they ‘reinvest’ in their qualities, thinking about what they’re doing rather than allowing their instinct to control their actions.  Simply put, they question their gut.  Take another look at figure 1 and you’ll notice that the number of uncertain decisions has nearly doubled.  Did the referees who heard the noise start to question their decisions?  Are the crowd selling a decision to the ref, rather than the other way around?

Possibly.  It’s also possible that in the practical world of refereeing officials seek, on some level, a ‘social payoff’.  Mark Clattenburg, for instance, stated that during the notorious Chelsea versus Tottenham Hotspur game in 2016, he “allowed them [Tottenham] to self-destruct” to avoid being blamed for Spurs missing out on the Premier League title.  Keeping their names out of newspapers and avoiding criticism from dominant figures, such as high-profile coaches, is something referees at all levels report as the motivation behind some decisions.  This is supported by research that concluded sports officials are more likely to get a decision incorrect if the score is tight; basically, they do not want to be the cause for a win or a loss.

The pressure is real.  Yet home advantage in football (and it is worth remembering that football is the outlier regarding home advantage and so it is a very real phenomenon) is dropping.  There are many reasons for this.  Transport to games, for example, is a lot quicker and comfortable now than it was fifty years ago.  Pitches are more uniformed regarding condition and players are much more experienced playing against (and alongside) international athletes and the styles they bring with them.  Another key variable that must not be underestimated, however, is the training and development of referees.  If Oliver himself was heavily influenced by how he may be perceived, he may have avoided showing Gianluigi Buffon a red card in the dramatic Champions League tie between Real Madrid and Juventus.  It would, after all, have been a lot easier to let his protests go unpunished.  Simply, our top officials are less influenced than ever by external pressures.  That’s not to say external influences do not exist, but when the level of scrutiny referees are subjected to is considered, that is incredible.  Nevertheless, more can be done.  Psychological training of officials is the best route to increasing consistency and is universally encouraged by researchers.  Our governing bodies must do more to develop this area.

What we can conclude from this discussion, and from Elleray and Oliver’s verdict of the 1970 FA Cup Final replay, is that officiating from the comfort of your armchair is easy.  After all, the Laws are the Laws.  But the impact of external pressures, influences and a myriad of other human factors – such as emotions and experiences – cannot be avoided in applied practice.  In the coming weeks and months, we’ll explore these further.

Stuart Carrington is a lecturer in Sports Coaching Science at St Mary’s University, Twickenham, London.  He is the author of Blowing the Whistle: The Psychology of Football Refereeing which is available here: https://www.amazon.co.uk/Blowing-Whistle-Psychology-Football-Refereeing/dp/1911121626/ref=sr_1_1?crid=1RMZKANQOYRG6&keywords=blowing+the+whistle&qid=1578307434&sprefix=blowing+%2Caps%2C144&sr=8-1